As a rule of thumb, businesses strategy can provide a clear vision about the best way(s) to leverage social media. For example, a company focusing on providing excellent customer service (e.g., Disney, Nordstrom) can use social media to engage and interact with consumers. Companies promoting low prices can feature special deals through social media; however, companies should remain transparent with intentions to use social media for marketing purposes.

Where do you think social media is headed in 2012? Is your company currently using social media? If so, how?

Retailers Fail to Respond to Facebook Complaints; Other Sites Matter Though 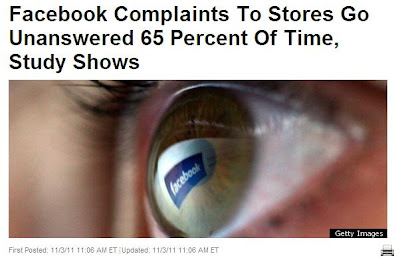 Many retailers recognize the importance of responding to Facebook complaints; however, they are currently developing tools and processes making it easier to facilitate communication through social media channels.

Facebook tends to receive the bulk of attention from retailers looking to capitalize on social media to enhance the shopping experience. More than 147 million U.S. consumers visit Facebook.com each month (Source: Quantcast.com). Given that, companies should to find ways to service customer complaints emerging on the popular social media site. Other social media sites receiving notable website traffic exist though. As a result, retail marketers should consider monitoring complaints appearing on social media sites like the following:


Companies should monitor complaints appearing on other social media sites, not just Facebook. Keeping an open dialogue with customers, regardless of the social media platform, will ultimately help mitigate the potential for a complaint to go unresolved.

Posted by Ronald Coyle at 11:41 PM No comments:

Should the Skyline Chili Crosstown Shootout be Sponsored by P&G's Puffs?

Being from Cincinnati, I can assure you there is no greater college basketball rivalry than the Xavier Musketeers and UC (University of Cincinnati) Bearcats. These two teams play each other in the Skyline Chili Crosstown Shootout every year. UC beat Xavier 66-46 this year.
I have some sympathy for Xavier fans, so I am offering a Puffs tissue so they can wipe their tears away from the loss. 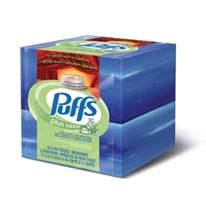 On another note, I found an interesting correlation between blog postings about Xavier and tissue paper (see graph below). Could this indicate an opportunity for Cincinnati's own Proctor and Gamble (P&G) to sponsor the event in the future? I think the "Puffs Tissue Crosstown Shootout" has a nice ring to it. Fans rooting for the losing team could get free tissue paper after the game. 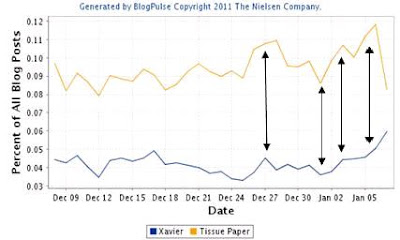 Don't worry Xavier fans. I say these things jokingly. Or am I?
Do you have any thoughts on the graph above? Feel free to comment.
Posted by Ronald Coyle at 9:21 AM 1 comment:

Last year I wrote a blog posting, Social Media Predictions in 2010, on New Year's Day 2010. Given that, it only makes sense that I review last year's predictions while offering several for 2011.

2010's predictions consisted of the following:

A few of my predictions for 2010 held true, while others did not. The success of the iPad, iPhone 4G and Droid X mobile devices was attributed to the growing popularity of apps. In fact, I recently switched from a Blackberry Storm ll to a Motorola Droid X based on the number of apps available. Numerous apps allowing consumers to view news content on their mobile devices became available this past year. 2010 holiday promotions for reading devices, such as the Amazon Kindle, illustrated consumers have an appetite for reading on the go.

Mobile usage increased in 2010, according to some sources.

My prediction of e-mail becoming more "real time" dwindled with the short lifespan of Google Wave. All is not lost though. Video and e-mail are predicted to drive social media in 2011.

Based on the above, my 2010 predictions were not a complete disaster. Perhaps my biggest oversight pertained to geolocation services. I did not include any prediction about geolocation services, despite website traffic to Foursquare increasing significantly. I made sure to redeem myself with a blog posting titled, "Intro to Geosocial Networking for Marketers" in April 2010.

Overall, 2010 was a year of mixed successes as it pertained to my social media predictions. Fortunately, I am not going to let that stop me from going out on a limb in 2011.

2010 placed a lot of economic demands on people. It was no different in the social media landscape where Facebook battled Google to become the leading site for website traffic. The claim for most website traffic will continue throughout 2011, but I think Facebook will hold the title throughout 2011. This is largely due to the Facebook bringing out the best aspects of search, social media and marketing. Facebook's unveiling of E-mail should more than solidify its position as the leading site in 2011.

I have several other predictions, besides Facebook retaining the number one position for website traffic in 2011. These include the following:

I hope everyone likes my predictions. Hopefully a few of these will come to fruition. If not, I'll be here January 1, 2012 owning up to my miscalculations. And like many people, I'll be starting over. What are your predictions for social media in 2011? I'd love to hear.
Posted by Ronald Coyle at 11:24 AM 11 comments: 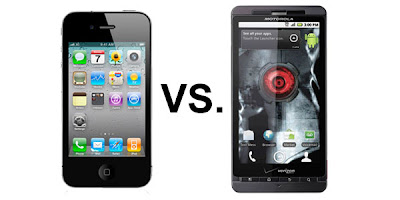 I got the new DROIDX for Christmas 2010. I find this device to be truly phenomenal and a huge upgrade over my former Blackberry Storm ll. I like the Andro Blogger application as well. I think this unique application will help tremendously with blogging on the go in 2011.
Posted by Ronald Coyle at 2:55 PM No comments:

Media and Entertainment Peaks Consumers’ Interest, but not for Long

Media and entertainment are a big part of our lives. It is often the one thing many of us have in common. Music, sports, technology and television contribute to entertainment within our lives. And for the most part, gaming is entertainment. The popularity of next generation consoles, including Xbox 360 PlayStation 3 and Nintendo Wii, has enhanced the entertainment value through increased social interaction. Millions of gamers load up to play their favorite games every day. In doing so, players engage in live chat or converse over microphones. The growing popularity of games, like the Halo saga, is fueling this need for increased social interaction.

Halo: Reach has received many accolades for its outstanding gameplay and graphics. Halo: Reach is considered a profound and influential game. Mashable.com found the game most impressive. In fact, Mashable.com reported Halo: Reach gaming statistics made available through Bungie.net. Perhaps the most interesting statistic pertains to the fact that gamers exhausted more than 2,000 years in live game sessions within the first week of Halo: Reach being launched. On top of that, some sources claimed Halo: Reach will be the game of the decade.

Understanding the impact of Halo: Reach requires a further understanding about media and entertainment in general. How much buzz do recent released games receive compared to other entertainment options, especially during an event or at launch? Furthermore, does Halo: Reach even receive more online buzz than other major games released over the past year? A quick search using NM Incite’s BuzzMetrics tool offers some insights. The graph below depicts online buzz two weeks before and after a particular event occurred or product launched. 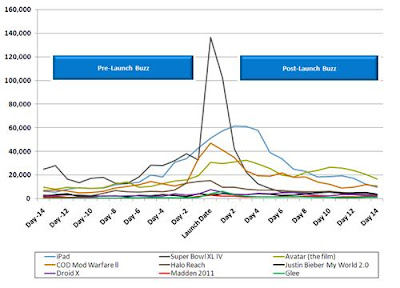 As we see here, Super Bowl XL IV receives the most online buzz prior to the main event, Super Bowl Sunday on February 7, 2010. Online buzz for the iPad built up prior to launch and extended about a week before dwindling down. In terms of games, Call of Duty: Modern Warfare ll receives more pre and post launch buzz than Halo: Reach. The pie graph below shows the trended data above from a different perspective. Similar to the graph above, it looks at the percentage of discussion that each entertainment option receives within two weeks of its event or launch date. 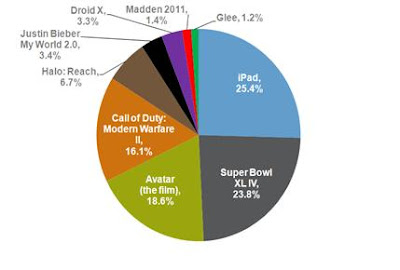 Here we can see that the iPad receives the most buzz around its official launch, which occurred on April 3, 2010. Halo: Reach receives more buzz than Madden 2011, but it only receives about a third of Call of Duty: Modern Warfare ll.
Halo: Reach is a great game in its own rights. It offers a compelling storyline, excellent gameplay and wonderful graphics. Despite its hype, it is clear that Halo: Reach does not receive as much online buzz as other entertainment options, including other games such as Call of Duty: Modern Warfare ll. It appears to be much more of a middle-of-the-pack entertainment option, receiving buzz levels closer to that of Justin Bieber’s recent album released, My World 2.0. While the longevity of the Halo saga illustrates its popularity among gamers, online buzz for Halo: Reach does not “reach” as high as many may have thought.
Similar to other media and entertainment options, Halo: Reach buzz begins to rise and lower within a week of launch. This begs a few questions. What can marketers do to help create and sustain buzz during pre and post launch phases?
Creating buzz during pre-launch is somewhat easier than post-launch; this is due to the consumers’ anticipation of an upcoming event or product launch. Unfortunately, few products or events take advantage of this scenario. Online buzz for products and events in the trend graph above does not begin to rise noticeably until a week or so from launch. Marketers can help create increase pre-launch buzz by participating in industry-related events (e.g., Consumer Electronics Show), releasing interesting product information at specific intervals, inviting consumers to participate in live demo sessions, creating microsites, identifying opinion leaders and getting them on-board early, taking pre-orders, and turning a product launch into an event.
Sustaining buzz post-launch requires a different set of techniques. Some of the better known approaches include making additional content available at specific intervals post-launch, creating online communities and participating in social media discussion.
Media and entertainment are an important part of consumers’ lives. The growing number of entertainment options means it will be harder for marketers to get their message through the clutter. Implementing a plan to foster and nurture buzz before and after launch should be a key component of any entertainment marketing strategy. Such efforts could help sustain buzz and the product life cycle beyond anticipated timeframes.
Posted by Ronald Coyle at 6:18 PM 2 comments:

Ronald Coyle
My name is Ronald Coyle. Previously, I worked as a Market Research Analyst with Nielsen. I have much experience with customer service, market research and social media. Life is taking me on a new journey right now. I am joining the United States ARMY as a medic. I ship out to Basic Combat Training (BCT) at Fort Benning September 2012. I intend to offer marketing and consulting help on a part-time basis until my military obligations are completed. Moving forward, I hope to use this blog as a cross section for discussion about civilian or military marketing, public relations, civil affairs and social media. My future goals include learning about the healthcare industry and possibly working in marketing, or public relations for a hospital or health insurance provider.